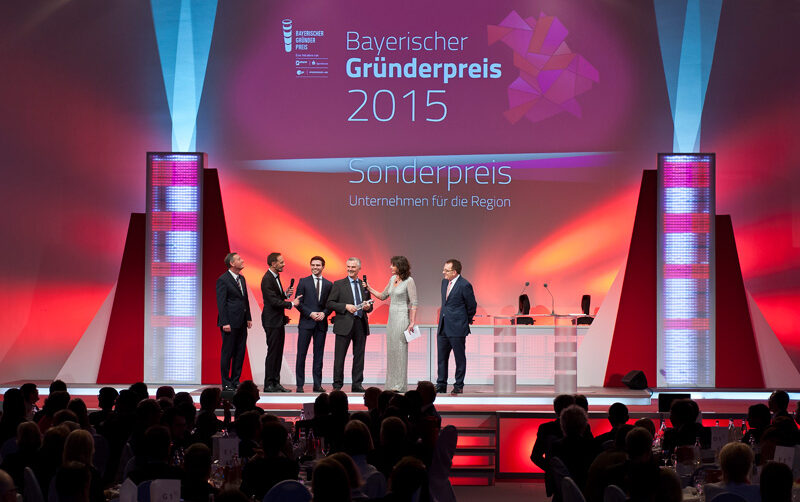 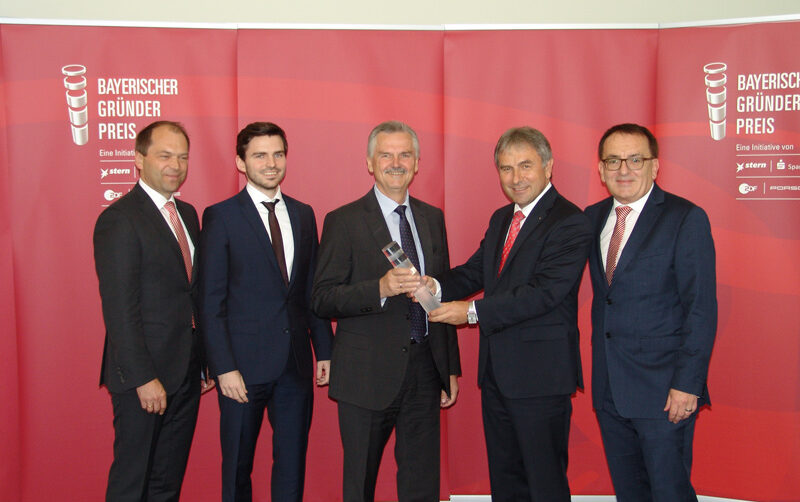 The Dr. Baumann group won the special award category in the 2015 Bavarian founder award and received the award as part of the annual entrepreneur conference in Nuremberg.
The Bavarian founder award is the most significant award for outstanding entrepreneurs in Bavaria and is awarded for exemplary performance when developing innovative and viable business ideas and when setting up new companies.

2015 founder award goes to Dr. Baumann. In 1998, lawyer and entrepreneur Dr. Wolfgang Baumann took the daring step of becoming independent and developed his vision of a group of companies that concentrated on restructuring and long-term realignment of insolvent companies in North Bavaria. In the meantime, 14 insolvent companies from the machine construction, steel construction, metalworking and natural stone sectors have found a new home under the group’s roof and currently employ 500 people in North Bavaria. Dr. Baumann was nominated for this year’s Bavarian founder award for this achievement. The Bavarian founder award is an initiative of the Sparkassen (savings banks), stern magazine, the German broadcaster ZDF and Porsche, and is the most significant award for outstanding entrepreneurs in Bavaria.

One of the most important factors for restructuring the companies successfully was that Dr. Baumann identified and used the existing potentials. In addition to the core of the company, which was worth keeping, these potentials include the know-how of the workforce and the potential in each employee that must be awakened and encouraged.
The outstanding entrepreneurial achievement by Dr. Baumann is not analysing the figures, but understanding people and employees. Dr. Wolfgang Baumann’s group of companies always begins where others only think of winding-up. As a qualified lawyer, former bank manager and managing director in the metalworking industry, Dr. Wolfgang Baumann brings complete technical expertise for a sustainable restart of the companies taken over. His decisive success factor beyond facts and figures is a human one: his trust in management and employees in the relevant company, in their abilities, their ideas and their strengths. Behind this is a firm belief in the possibilities of people and our region.
Dr. Baumann, together with his son Matthias, understands how to form agile and innovative companies out of stagnant and paralysed firms. Under the Dr. Baumann group roof, companies rediscover their old strengths and discover new potentials for the future.

By continuously encouraging innovation and initiative, the development of new products and ideas could be advanced together with the employees and these products and ideas have led to numerous patents in the automation technology, stage mechanics and metallic engineering sectors. Sustainability plays an important role as another success factor. The aim here is to highlight long-term perspectives to the employees, which is reflected by continuous investment in capacity increases and modernisation of the machinery. New investments of 6 – 7 million euro are planned for 2015 alone.

Dr. Wolfgang Baumann emphasised how happy he and his group of companies are to have been awarded the 2015 Bavarian founder award. However, he also emphasised that he needed partners along the way, without whose help this development and success would not have been possible. One of these partners is the Sparkasse Oberpfalz Nord. The Sparkasse Oberpfalz Nord is firmly rooted in the people and the region. As an important partner to the companies, they are well aware of the special responsibility towards our region. This also includes not just going by facts and figures but recognising new opportunities and chances for the people in the North Oberpfalz region in good time and supporting these.
Winning the 2015 Bavarian founder award in the special award category makes this the third award in a row to go to companies and establishments in our region, following on from 2013 and 2014. In 2013, VANTAGE Film GmbH from Weiden was awarded the Bavarian founder award in the “Fast climber” category for their high-tech products in the film lens and film technology sectors, which have been used in Hollywood productions among others. In 2014, Abtei Waldsassen was awarded the 2014 Bavarian founder award in the “Social and cultural engagement” category.

This commitment by the Bavarian savings banks makes an important contribution to local medium-sized businesses. As representatives of many successful founders and entrepreneurs, selected award winners are honoured together for their drive, innovations and motivation, which are outstanding in many respects.